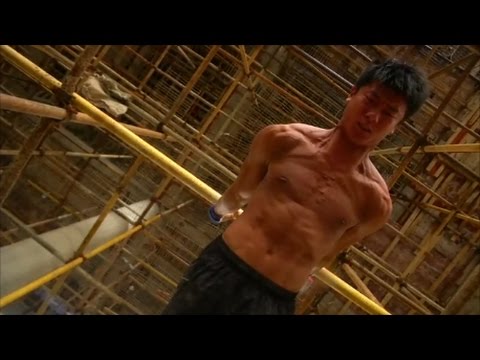 Shi Shenwei wakes up for another 10-hour day of manual labour at a construction site in China, a routine he has performed for little pay and recognition since leaving middle school at the age of 16.

But over the past year, the 23-year-old migrant worker has made an unexpected leap into achieving internet fame, thanks to the self-taught fitness routines he has taken to practicing on site.

As he darts up the side of a temple under construction in southern China’s Fujian province, which he and his colleagues have been hired to build all summer, Shi begins his work day.

He says he achieved little at school and was an online gaming addict during his younger years. Later, when working on building sites, he felt thin and weak.

« Whenever I was working, doing some sort of small jobs at the construction site, I felt extremely tired. I couldn’t take it, » Shi said.

But a few years ago, he wanted to turn over a new leaf.

« I wanted to change myself. On the internet I saw a workout video and I thought that person did a great routine. »

With his lean build and six pack, Shi has now attracted 1.1. million followers on the Chinese app « Kuaishou, » an instagram-like app which posts videos with audio and captions, and has already been invited to perform on several major Chinese talent shows.

Using the building site around him as his playground, the young migrant worker does not require the formal equipment one might find at an average gym – instead, bricks serve as dumbbells and the maze of scaffolding as high bars.

During his lunch break, Shi swiftly pulls himself up onto the scaffolding in the interior of the temple. He swings into action, performing a high-bar routine in front of his dutiful cousin, who films from multiple angles using various smartphones.

« While other people are eating and singing karaoke, I’m whole-heartedly focused on what I want to do, » Shi said.

Shi says his trademark combination of flips, jumps, and stands are all self-taught, and mostly imitations of videos he has seen online.

His colleagues, many of whom are relatives, say he is unlike anyone else they have seen. He is at it everyday when others are taking a lunch break, or after his work is done for the day.

« You can put it this way – exercise is a good thing, this way you can keep your body fit, » his 55-year-old uncle and boss, Shi Lijia, said. « But working out at a construction site? Most places don’t allow this… Most people wouldn’t (do this) – it’s too dangerous. »

In China, the major upsurge of internet broadcast apps and the availability of smart phones has led to the discovery of talents like Shi, who has gained admiration from gymnasts, fitness junkies and bodybuilders alike.

Programme du régime : Want to know Are Your Friends Making You Fat? Here is a article on Are Your Fri…