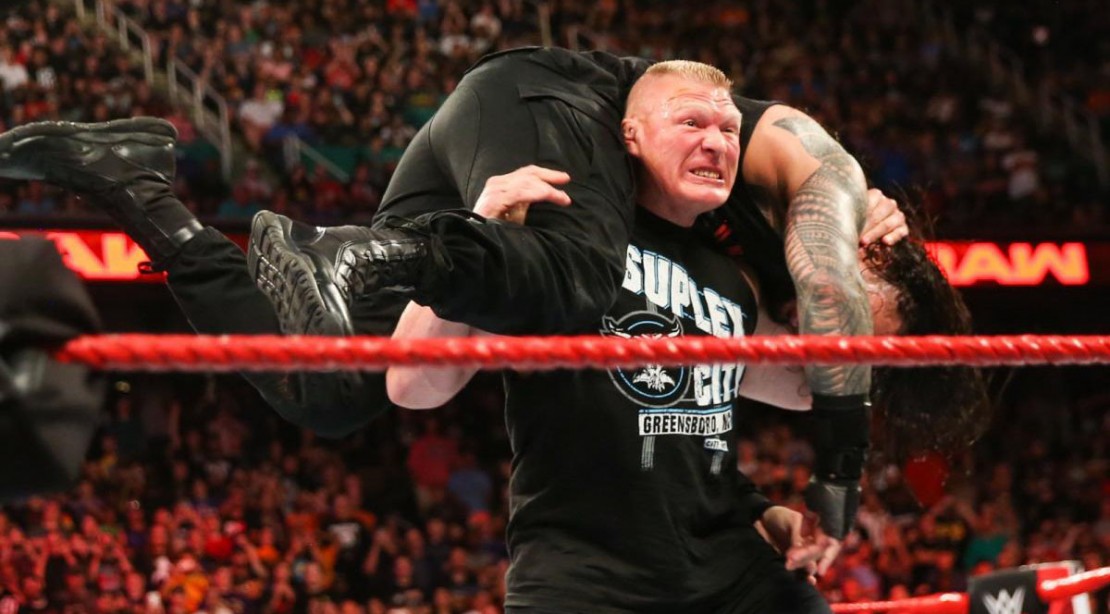 After Brock Lesnar’s shocking behavior last week, it appeared that his longtime alliance with Paul Heyman was at an end, putting Roman Reigns at a clear advantage going into SummerSlam.

However, things aren’t always as they seem.

On Raw this past Monday, Reigns addressed the crowd, once again telling them that he plans to end Lesnar’s WWE career.

Enter Paul Heyman, who came to Reigns with a deal: Become his “advocate,” and he’d give away all of Brock Lesnar’s secrets. Reigns wasn’t buying it and refused to accept. Heyman tried his best to convince Reigns he was serious, reciting a quote in Samoan from Reigns’ father and handing him an “agreement in principle.”

Then, to the shock of the entire WWE Universe, Heyman doused Reigns in pepper spray, blinding him. And then came “The Beast.”

It seems that Lesnar and Heyman’s break-up was all an act to get into Reigns’ head, and it sure looks like they succeeded. While it appeared that Reigns had the upper hand last week, now it looks like the Universal Championship match at SummerSlam could be anyone’s game.

Meanwhile, former Intercontinental Champion Seth Rollins has clearly been struggling after a devastating loss to Dolph Ziggler weeks ago. While his matches against Ziggler and his partner Drew McIntyre have been impressive feats of strength, the fact of the matter is that Rollins still isn’t champion.

However, it turns out Rollins had a trick up his sleeve.

Throughout Monday’s episode of Raw, General Manager Kurt Angle was unable to find Rollins for the in-ring contract signing. If he couldn’t sign the match contract alongside Ziggler, he would have to forfeit. The match also had a stipulation: With McIntyre being in Ziggler’s corner, Rollins would have someone in his.

At the last second, Rollins appeared, and he brought a friend with him: Fan-favorite Dean Ambrose, who has returned to the WWE Universe after eight months of being out due to injury. The two superstars then took out Ziggler and McIntyre, and Rollins subsequently signed his contract.

With Ambrose at ringside during the Intercontinental Championship match this Sunday, it looks like Rollins just might have the secret weapon he needs to finally take down Ziggler and McIntyre.

SummerSlam will air live from the Barclays Center in Brooklyn on August 19 only on the WWE Network.